Disney has announced that Halloween Time at Disneyland and California Adventure will return with frightfully fun experiences from September 3, 2021 through October 31, 2021. In this post, we’ll share details of the announcement, what’s missing, and what to expect.

The good news is that most of the major draws of spook season are returning to Disneyland and DCA after last year’s hiatus while the parks were closed. Haunted Mansion Holiday and Guardians of the Galaxy – Monsters After Dark will both be back, as will greetings with friendly characters and villains, beloved seasonal décor like the giant Mickey Mouse jack-o’-lantern on Main Street, and delicious fall treats.

Most notably, Oogie Boogie Bash Halloween Party will return to Disney California Adventure. We had a blast at that event in its inaugural year, and it’s good to see Disneyland getting a “normal” Halloween party (which further suggests to us that Walt Disney World is only doing the “After Hours” event due to October being the start of the busy 50th Anniversary). Our Guide to Oogie Boogie Bash – A Disney Halloween Party covers those dates, details, and pricing, so we won’t rehash that here.

Note that this post is mostly a press release style rundown of what Disneyland Resort announced, with some of our own edits to cut out the flowery marketing-speak, and limited commentary added.

If you want something more comprehensive and useful, see our 2021 Guide to Halloween Time at Disneyland. 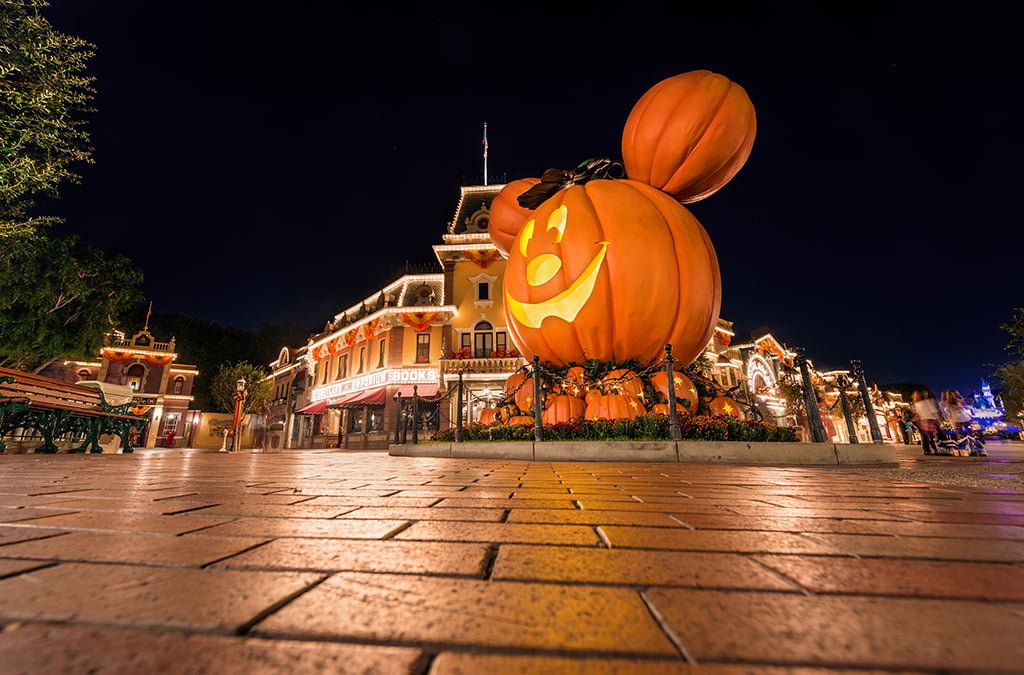 As guests journey into the park, they will find pumpkin statues representing Fantasyland, Tomorrowland, Adventureland, Critter Country and Frontierland surrounding the Partners Statue in front of Sleeping Beauty Castle. In Frontierland, there will be a celebration of the Day of the Dead with a colorful Día de los Muertos tribute featuring a musical trio of iconic skeleton figurines, brightly colored flowers, and other decorations. 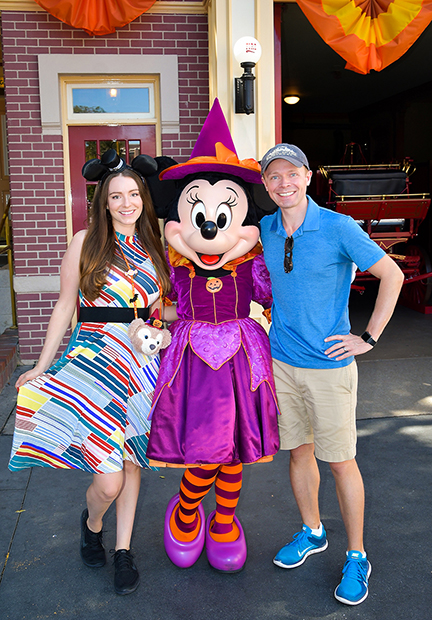 At Disneyland, guests will encounter favorite Disney characters throughout the park. On Main Street, Mickey and friends show off their Halloween finest with Minnie as a witch, Donald as a pumpkin, and the rest of their pals adding to the Halloween family-friendly fun.

Other characters found throughout the park include dastardly Disney villains who have come out to cause some mischief. 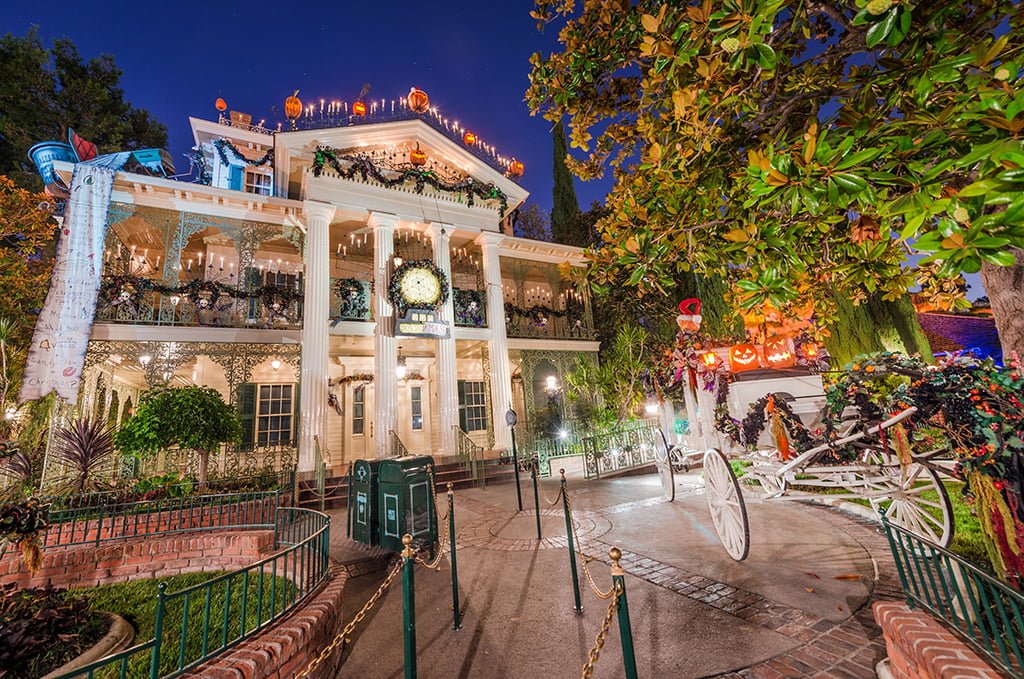 Haunted Mansion Holiday will feature a merry makeover of the beloved eerie estate. Jack Skellington is behind the mayhem, decorating the mansion with frightfully festive touches inspired by “Tim Burton’s The Nightmare Before Christmas.”

Dedicated fans of the holiday haunted house will look forward to spotting the annual gingerbread house on its precarious perch on the ballroom table, making its 20th appearance for this collision of two holidays. Other favorite sights await, including Sally, Zero and other characters from the movie. 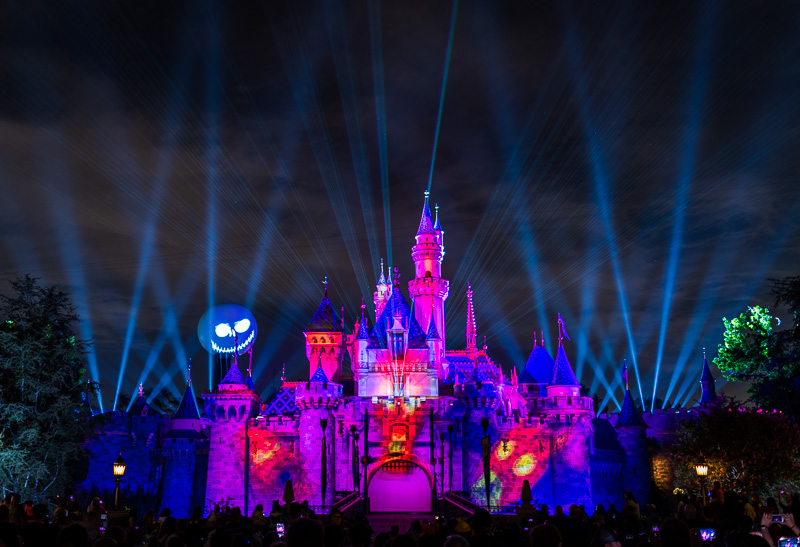 Every night from September 3 through October 31, guests will enjoy a dreadfully delightful treat in the form of “Halloween Screams”, a supernatural projection and special effects show.

On weekend nights, Halloween Screams also will take to the skies and enhance the mischief with fireworks. Guests will be able to view the nighttime spectacular from several different locations throughout the park, including Main Street, Sleeping Beauty Castle, Rivers of America, and the facade of “it’s a small world.” 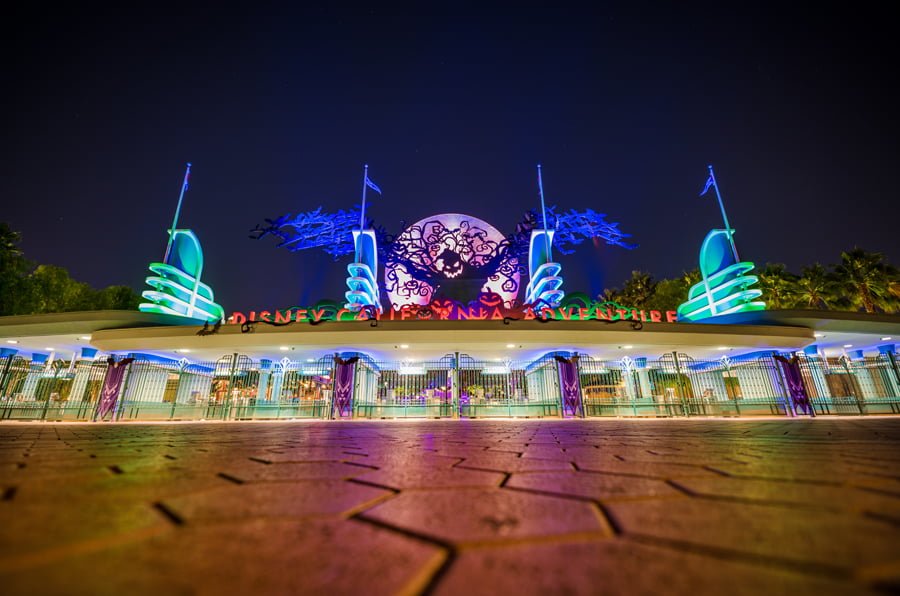 At Disney California Adventure, Oogie Boogie will once again loom over the entrance. On Buena Vista Street, Mickey Mouse and friends will be throwing it back with old-fashioned Halloween costumes. Guests of all ages will enjoy seeing fortune teller Minnie Mouse or taking a photo of Daisy for a be-witch-ing family keepsake. Donald is also looking devilishly handsome and Goofy has a ghostly grin that is ready for any picture.

Seasonal décor will also add to the Halloween ambiance on Buena Vista Street. At night, the façade of Carthay Circle Restaurant oozes with Halloween magic as bats swarm, energy pulses from within and projections light up the iconic tower structure with a spellbinding display. Also returning to this plaza is the 10-foot-tall statue of the Headless Horseman holding his jack-o’-lantern head to the sky. 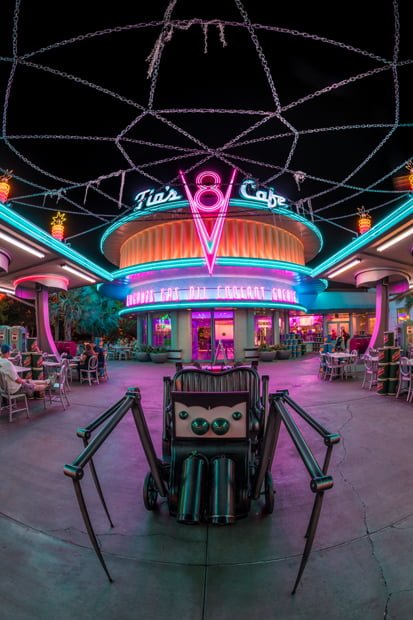 Popular attractions will be transformed for the Halloween season at DCA. Cars Land will once again transform for its Haul-O-Ween makeover, as Radiator Springs becomes Radiator Screams.

Lightning McQueen, Mater, Cruz and Red will be ready to greet guests in their “car-stumes” before they race off to go “trunk-or-treating.” Guests can continue the family-friendly fun by taking a spin on popular Cars Land attractions that rev up with Halloween spirit: Mater’s Junkyard Jamboree croons spooky songs to become Mater’s Graveyard JamBOOree, and Luigi’s Rolickin’ Roadsters takes guests on a wicked whirl as it becomes Luigi’s Honkin’ Haul-O-Ween. 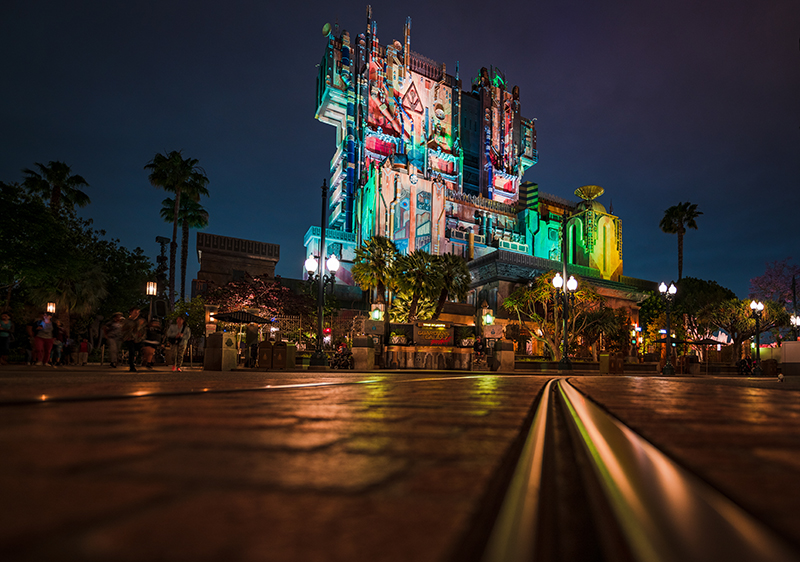 While the Guardians of the Galaxy have successfully escaped The Collector’s Fortress, Groot was accidentally left behind. Guests can successfully complete their rescue mission to save Groot by helping Rocket distract creatures from around the galaxy that have gotten loose. By teaming up with the Guardians, every guest can find their inner hero this Halloween season. 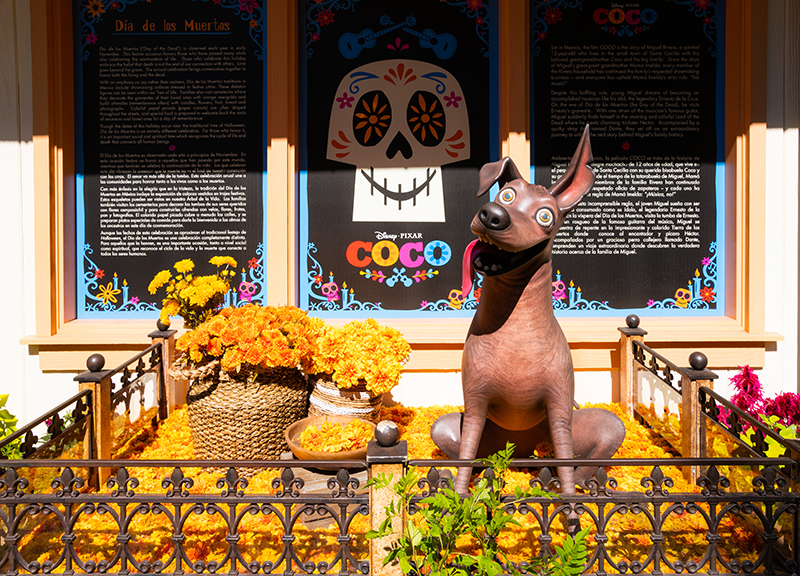 Among the activities to enjoy are “A Musical Celebration of Coco,” an entertaining street show honoring Disney and Pixar’s “Coco” and the everlasting bonds of family. Guests at this seasonal festivity also will be treated to Mariachi music at Paradise Gardens Bandstand; The World of Coco, an evocative art exhibit; a photo opportunity with a hand-animated figure of Miguel from “Coco” as well as the iconic Arbol de la Vida (Tree of Life) photo location and memory wall. 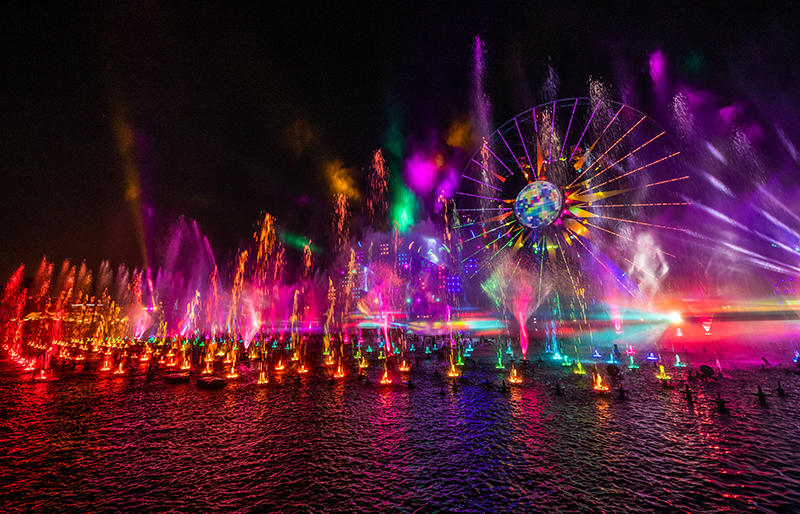 Finally, what it appears will not be back for 2021 Halloween Time at Disneyland. First, there’s no mention of Ghost Galaxy, the Halloween overlay of Space Mountain. It’s possible this will be announced later, as it’s not typically as high profile of a change as Haunted Mansion Holiday or Monsters After Dark. However, it probably would’ve been mentioned if it’s happening, so we’ll call that one unlikely.

Next, World of Color – Villainous! This was shown during the first year of Oogie Boogie Bash – A Disney Halloween Party, and it received decidedly mixed (to put it charitably) reviews. However, that’s probably not why it isn’t returning. If rumors are to be believed, World of Color isn’t coming back at all until 2022. Nevertheless, not a bad lineup for Halloween given that Disneyland is still in “phased reopening” mode, and also given what was announced for Walt Disney World. As always, we’re really looking forward to Halloween Time at Disneyland. Outside of Christmas, it’s our favorite seasonal event of the year!

Planning a Southern California vacation? For park admission deals, read Tips for Saving Money on Disneyland Tickets. Learn about on-site and off-site hotels in our Anaheim Hotel Reviews & Rankings. For where to eat, check out our Disneyland Restaurant Reviews. For unique ideas of things that’ll improve your trip, check out What to Pack for Disney. For comprehensive advice, consult our Disneyland Vacation Planning Guide. Finally, for guides beyond Disney, check out our Southern California Itineraries for day trips to Los Angeles, Laguna Beach, and tons of other places!

Are you excited for 2021 Halloween Time at Disneyland? Will you purchase tickets to attend the seasonal event, or only go if Annual Passes return by then? Planning on doing Oogie Boogie Bash? Any questions? Hearing your feedback—even when you disagree with us—is both interesting to us and helpful to other readers, so please share your thoughts below in the comments!