We just couldn’t resist doing another post on our baby elephant Jabali, born August 24 at Disney’s Animal Kingdom. Now that he’s out on the savanna with the herd, each day brings new discoveries. Of course, mom Vasha and big sister Kianga are always nearby, and our animal care team is keeping a watchful eye. 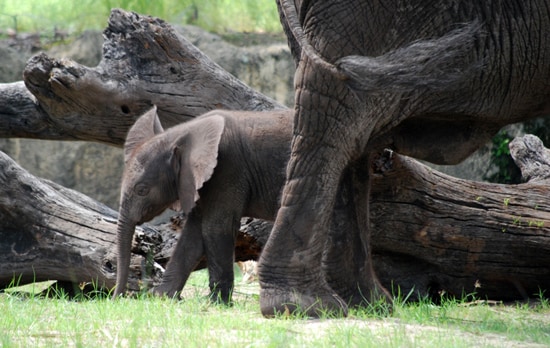 Since they’re so close in age and elephants are very social, we were wondering how Jabali and Luna (who turned one year old a few months ago) would get along. Members of our elephant team report that, at first, when Jabali approached Luna, she would run away, probably not sure what to make of the new kid on the block. Then, once she became more comfortable, she would try to wake him up when he took a nap – until big sister Kianga put a stop to that. Now, the team reports Jabali and Luna are hanging out together.

And it’s been wonderful to hear from our Kilimanjaro Safaris and Wild Africa Trek guests (and Disney Parks Blog and Walt Disney World Facebook readers too!) how much they’ve enjoyed seeing Jabali and the rest of herd during recent visits.

(Photos courtesy of the Elephant Team)