Still Jammin’ at Disney’s Animal Kingdom After All These Years

Hi! I’m Shawn Slater, communications manager for Walt Disney Parks and Resorts Creative Entertainment. It’s been a decade since we honored the anniversary of Walt Disney’s birth with our 100 Years of Magic celebration, and one of the best features of that event is still delighting guests today. This month, Mickey’s Jammin’ Jungle Parade at Disney’s Animal Kingdom marks ten years of the Disney characters paying tribute to the wild spirit of their animal friends.

Rafiki leads the procession through the park, bringing with him a Party Patrol of dancers, stilt-walkers and gigantic puppets. Joining the parade are Mickey, Minnie, Donald and Goofy, aboard customized Adventure Rovers, along with park guests selected to ride along in fanciful rickshaw taxis.

Reed Jones, Director of Creative Development for Walt Disney World Resort, was the Show Director on Mickey’s Jammin’ Jungle Parade. Reed said, “Creating this show was a blast. Because Disney’s Animal Kingdom wasn’t built for a parade, our perceived limitations actually inspired the final creative concept. The tight paths inspired the narrow rovers and the heights of the visuals, and the dense jungle greenery inspired the vibrant color palette so all the various elements would stand out.” 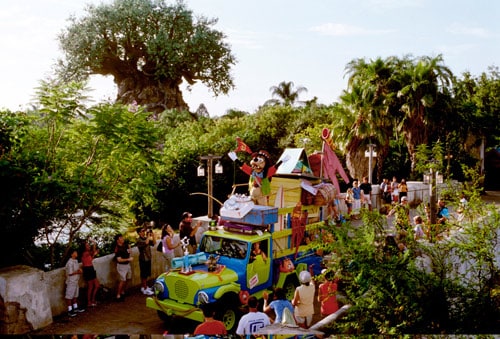 Since there was no sound system covering the parade route, the units had to supply their own sound sources, blending together to build each of the world beat songs, from rhythms to chants to lyrics. Reed said, “Music Director Dan Stamper and I searched for just the right theme song, until we realized our description of what we were looking for was just the song we needed, so we wrote it ourselves! The solos on ‘Rhythm of One’ are sung by Montego Glover, who is currently starring on Broadway in ‘Memphis,’ and Phillip Lawrence, the current voice of Sebastian, as well as a producing partner with Cee-Lo Green and Bruno Mars. Both were performing in our ‘Tarzan Rocks!’ show at the time.” 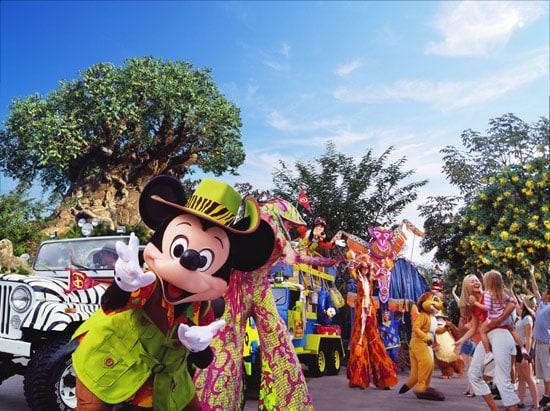 On your next adventure at Disney’s Animal Kingdom, join the “Rhythm of One” and bark and growl and screech and roar along with Mickey’s Jammin’ Jungle Parade, a Guest favorite for ten years and counting!